Q. Does the Wind Energizer damage the turbine in high winds? 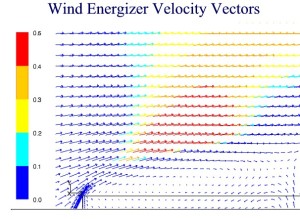 The answer is no, and here are the reasons:

The Velocity Vector Chart (right) below shows that the vectors of the altered wind return mostly to the horizontal by the time they reach the blades.

Q. What are the key benefits of this groundbreaking technology?

Q. Is it necessary to build a 360-degree structure, which is obviously more expensive?

We addressed this question by making a partial structure primarily in the direction of the wind. We have shown that the flow in the rotor plane is not adversely affected in any of the cases, while in the design case of wind coming from the front, there is a significant favorable velocity increase.

Q. Does each wind turbine require its own Wind Energizer, and how much does it cost?

Each wind turbine DOES require its own Wind Energizer which costs approximately $500,000. Purchasers will realize a 25% return on investment per year.

Q. Can the Wind Energizer be used on any wind turbine?

Yes it can, even as a retrofit.